Henricus Antonius"Han"van Meegeren was a Dutch painter and portraitist, considered one of the most ingenious art forgers he 20th century.Van Meegeren became a national hero after World Was II when it was revealed that he had sold a forged painting to Reichsmarschall Hermann Göring (second in command after Hitler) during the Nazi occupation of the Netherlands.

In May 1945, Van Meegeren was arrested, charged with collaborating with the enemy and imprisoned. His name had been traced to the sale made during WW II of what was then believed to be an authentic painting by Vermeer to Nazi Field-Marshal Goering. Shortly after, to general disbelief, Van Meegeren came up with a very original defense against the accusation of collaboration, then punishable by death. He claimed that the painting,Christ with the Woman Taken in Adultery, was not a Vermeer but rather a forgery by his own hand. Moreover, since he had traded the false Vermeer for 200 original Dutch paintings seized by Goering at the beginning of the war, Van Meegeren believed he was a national hero rather than a Nazi collaborator. He also claimed to have painted five other "Vermeers" as well as two "Pieter de Hoochs" all of which had surfaced on the art market since 1937.

The trial of Han van Meegeren (photo below) began on 29 October 1947 in Room 4 of the Regional Court in Amsterdam. 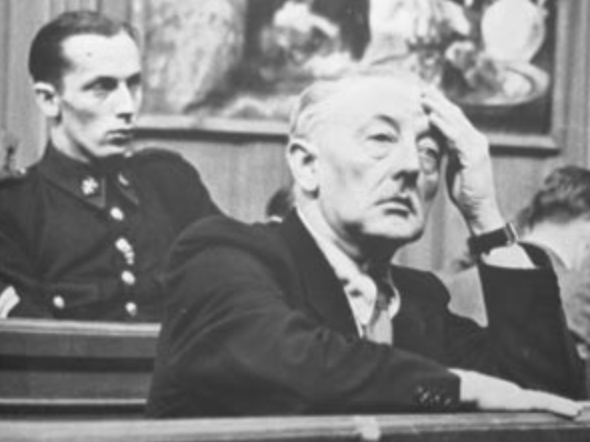 In order to demonstrate his case, it was arranged that, under police guard before the court, he would paint another "Vermeer,"Jesus Among the Doctors (Photo below), using the materials and techniques he had employed for the other forgeries. 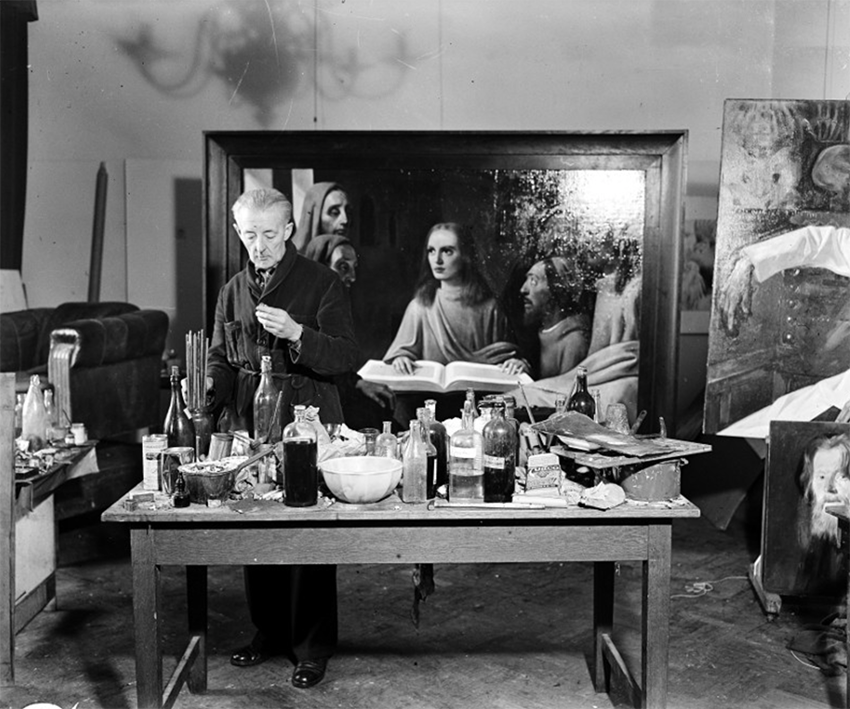 During the incredible two-year trial, Van Meegeren confessed that "spurred by the disappointment of receiving no acknowledgments from artists and critics....I determined to prove my worth as a painter by making a perfect seventeenth-century canvas." "During the investigation, Van Meegeren revealed that having once fooled the art world with Christ and the Disciples at Emmaus, he was encouraged to try new forgeries.

Van Meegeren spent four years working out techniques for making a new painting look old. The biggest problem was getting oil paint to harden thoroughly, a process that normally takes 50 years. He solved the dilemma by mixing his pigments with a synthetic resin, bakelite instead of oil, and subsequently baking the canvas. Now he was ready to begin.

At the end of the trial, the collaboration charges were changed to forgery and Van Meegeren was condemned to one year in confinement, but it was said he was tickled to get only one year in jail. "Two years," he told a reporter, "is the maximum punishment for such a thing. I know because I looked it up in our laws twelve years ago, before I started all this. But sir, I'm sure about one thing: if I die in jail they will just forget all about it. My paintings will become original Vermeers once more. I produced them not for money but for art's sake."